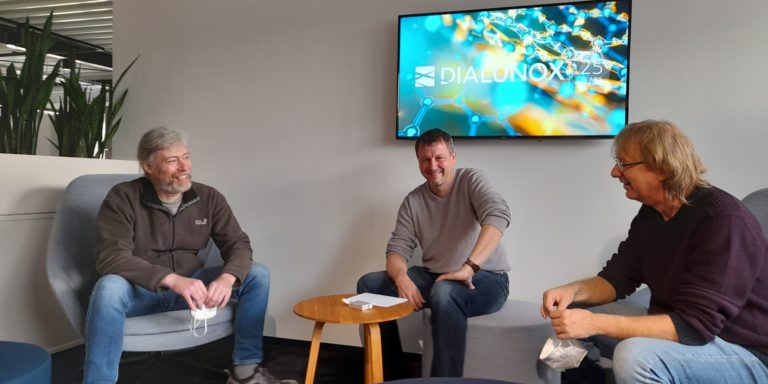 Tommy, how did you come to found ESE GmbH in the first place? How did Klaus Haberstroh, also co-founder and managing director, and you come up with the idea?

Thomas Wiest (ThWi): It is a bit of a crazy story…We had both worked together at PerkinElmer for almost ten years and developed the Lambda 900 (a spectrophotometer – editor’s note), for instance, which we still have here. With this, we could already look back at 10 years of joint experience regarding instrument, software and optics. When the company decided to relocate the entire know-how to the USA and we realized that there was really no future for us at the old factory in Überlingen. So we decided to start our own business, supported by the management of PerkinElmer at the time and provided with an order guarantee for the first few years.

That means, you didn’t start completely from the scratch?

ThWi: No, we had a soft exit. As I possessed quite some software know-how, I was able to cover the existing orders for us while Klaus was able to take care of the acquisition of new projects. After about a year we could win the company CIBA as a customer. This was another crazy story, by the way…Klaus got to know somebody during a mountain tour who asked him whether Klaus knew someone who could measure UV? “We can do that!” said Klaus, and that’s how we came to CIBA, who then actually financed our company.

ThWi: For me, the way of working was always the same. But back then, of course, at the beginning, we didn’t have much space. Klaus and I worked in his holiday apartment – a room of about 20 sqm, two people, five computers… During summertime it could get up to 40 degrees warm in there. And as CIBA project started to develop, we grew very fast and soon were able to move to the old clock factory in Ludwigshafen in the Mühlbachstraße.

Question for you, Thomas. You have been with the company for 20 years now. How have you experienced the change of the company from the beginning until today?

Thomas Wenzler (ThWe): It feels like I’ve been working in several different companies over the years, the change in the technology trends has been incredible…We’ve just spoken about how it all started with CIBA, then went on to the web servers, solar system control and finally to the fluorescence measurement and lateral flow devices just as we have them today.

ThWi: And then the Multireader (isothermal measurement device) came in 2012….

ThWe: So, on the one hand we had technological developments, but on the other hand also changes in the company organization and personal changes. In the beginning there were ten of us, everybody knew everybody. Then you start to grow and you don’t know everybody anymore. The real change began from small and familiar to bigger and bigger with certain structures and also with certain departments, in which not everyone can do everything anymore, because it simply becomes too much. Yes, and I have to say, it really feels like I’ve been working for different companies…

What were your personal highlights in your active time so far, from ESE, QIAGEN to DIALUNOX today?

ThWe: There were lots of highlights. The one I thought was one of the funniest was the thing with Bluetooth. Everyone knows about Bluetooth today. But I did my diploma thesis on it back then, Bluetooth had been around for exactly five years. So Bluetooth came into existence at approximately the same time as ESE GmbH had been founded.. I think it was 1998…

Nobody spoke about Bluetooth back then…

ThWe: Right, there were very few smartphones that had Bluetooth in them and our first fluorescence measurement device we developed for CIBA was a Bluetooth device. It was battery-powered and one could put the device on the table and do wireless firmware updates. That was 2002/2003 when we started with Bluetooth. I also visited the CEBIT trade fair in 2002 and got in touch with the company that no longer exists because it was bought out. The company’s name was National Semiconductor and we got the development samples from them from Japan. And the funny thing is, there were exactly two companies in Europe that got the Bluetooth modules from this huge global company. These two companies were ESE GmbH with 15 people and the former Nokia. And so it began…

And Tommy, how would you describe DIALUNOX today?

ThWi: What I had to learn is that this is not just MY company anymore. That’s quite hard to realize if you used to be the boss or it least always knew in the past what was going on. DIALUNOX definitely has a chance. The working atmosphere is still great. I can create whatever I like if I may put it this way. That’s great, and on the other hand. On the other hand, I always have to think about the cost center, I write my hours down. But generally speaking, I still consider it to be a great company but of course completely different than it used to be back then. Like Thomas said, I´ve gone through three or four different companies…

Is there anything you would like to wish DIALUNOX for the next 25 years?

ThWi: I think we are starting to have a small market that we are able to serve. If we place good products there, then we stand a very good chance to survive. The potential will not get less and will continue to get more. Many people are interested in all kinds of tests that they can perform themselves at home. It’s really crazy: we swallow all kinds of vitamins just to stay healthy. A huge market is emerging. If we have good products and DIALUNOX does have good ideas, things will work out well.

ThWe: Honestly, there is hardly anything I can add to that… I wish DIALUNOX can get back to the creativity level and the speed of doing things we used to have in the past. And I think if you have an appropriate portfolio, then you certainly have very strong chances of being a pioneer in this industry.

Tommy and Thomas, thank you very much for taking your time and talking to us.

More from our blog:

New IVDR REGULATION (EU) 2017/746: some considerations on how to handle documentation as a contract manufacturer

02/21/2022
Read time: 3 min
The new IVDR regulation not only poses challenges to the suppliers of the IVD-labels instruments but also to their contract…
Read More
Menu