Interview with Klaus Haberstroh, one of the founders and former managing directors of DIALUNOX 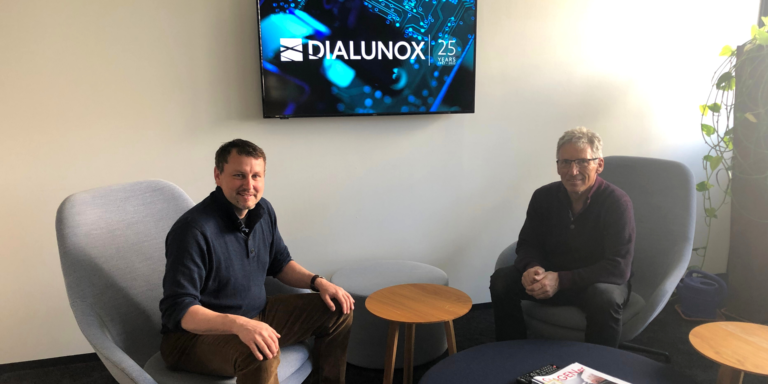 In the interview Klaus explains how ESE aka DIALUNOX was founded. He talks about the challenges of transformation when a start-up company begins to grow. Klaus also talks about the differences of working for a small company versus a large corporation.

Klaus, how did you ultimately come to found the ESE company back then?

Klaus Haberstroh (KlHa): Well, the trigger was that the company PerkinElmer in Überlingen was planed to be relocated to the USA. Actually, it was planned for me to go to the USA, because they needed our know-how, but my partners and myself didn’t want that. Then we thought about what we could do and since we had very good contacts in the field of embedded system development of real-time operating systems and saw that there was a need to develop such systems, we dared to take the step into self-employment. Instead of a severance payment, we got all the development tools and orders for one year from our previous employer. This gave us a very soft start. Tommy then did all the work and I took care of the alternative projects and hit the jackpot with the new customer Ciba Vision in the very first year.

What were your highlights in your first ten years at ESE? Before the sale to QIAGEN?

KlHa: One highlight was certainly that we successfully completed the development of Ciba Vision’s UV lamp and established this partnership. The second major success was then when the company Eyesense was founded and we received the research contract for the development of a “mini detector”. At that time five companies were commissioned, for example also “Ocean Optics” from the USA and also other renowned optics companies. And in the end we were the only ones who were able to develop a working system. Eventually, we managed to secure this technology for other applications and then to go wide with this detector base as a component. That is still the real basis for the business today.

True. And still absolutely competitive. You then sold the company to QIAGEN in 2010 and from then on you were no longer the founder and entrepreneur, so to speak, but an employee. How would you describe this difference between the entrepreneur and then later the CEO of a company that belongs to a large corporation?

KlHa: The three years at QIAGEN were an exciting time. I saw a lot, but I then realized pretty soon that it didn’t really fit my personality. I essentially don’t care whether I’m an employee or an entrepreneur. For me, the focus was always on simply developing new things in a creative manner. The major difference was the relationship with the employees. Whereas before I was always in the middle of happening and actually had a say in everything, I was then also involved in decisions on a corporate level and was no longer allowed to communicate them as openly as it used to be the case in the past. And so one begins to distance himself a bit from the employees and the company.  I started having issues with that over time.

Looking back, would you dare the step again? In other words, start a company like “ESE” once more?

KlHa: Yes, if I were younger, I probably would. After ESE and QIAGEN, I took up a new project in my “retirement”. Yes, it was the right decision for me to be independent, to be creative, to be visionary, and that’s what I still am today.

If you look back now at your time at ESE and then the three years at QIAGEN, how do you think the company has changed?

KlHa: There were several stages. So until 2003, when we moved to Stockach, it was actually a small family. We all sat together, everyone listened to each other’s phone calls. I constantly knew what each employee was doing and what they were up to. And from 2003, after we moved to new premises, we grew a lot. I then had my own office. There were 15 -16 employees and I then no longer knew what each individual was doing. Many other business colleagues have told me that this phase of company growth is very difficult, because then you have to start structuring the business and setting up departments.

KlHa: You have to let go and learn that you no longer have control over everything. And then, of course, there are different issues among the employees: They also have to come together. In addition, it was precisely during this period that we had the big growth phase with major projects for Ciba Vision. These were billion-dollar projects there, which were actually much too big for a 15-man company. It was a very difficult phase, which only calmed down again when we were already represented at the Stockach site with 30 employees. Production was set up and everything ran more smoothly.

And at the start, I was just a normal engineer. I simply had to learn a lot during that time. As an employed person, you always thought you knew everything about how a company worked. But when you have to do it yourself, it’s a completely different pair of shoes (laughs).

More from our blog:

New IVDR REGULATION (EU) 2017/746: some considerations on how to handle documentation as a contract manufacturer

02/21/2022
Read time: 3 min
The new IVDR regulation not only poses challenges to the suppliers of the IVD-labels instruments but also to their contract…
Read More
Menu